Advocacy and Action in the Trump Era: Highlights from our Panelists and Actions to Take

By Erin Shaver and Janine Vanderburg, Joining Vision and Action 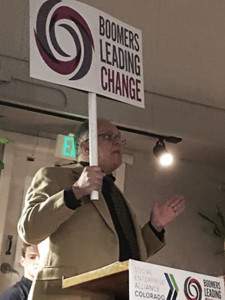 It was standing-room only at Joining Vision and Action on Wednesday night, when more than 100 people from all over the local community showed up, ready to listen, learn and share their experiences at the panel/workshop, Advocacy and Action in the Trump Era.

A joint effort of JVA, the Colorado chapter of the Social Enterprise Alliance and Boomers Leading Change, the session featured panelists from Colorado organizations that work across of spectrum of human rights and social justice issues. The main theme? The Women’s March on Saturday was inspiring, but now is a key time to maintain momentum and take action. Each panelist focused on actionable steps one can take to support causes that seem timely and meaningful.

The session opened with JVA CEO Janine Vanderburg welcoming the crowd and encouraging participants to listen carefully to speakers and to “choose their own activist adventure” based on their strengths and interests. Boomers Leading Change’s (BLC) executive director, Phil Nash, followed, reminding those present that BLC is “rewriting the narrative for older adults in the metro area as part of a larger movement across the country that is going to change the way people age.” BLC hopes to help older adults have meaningful lives in their 50s, 60s, 70s and beyond, and it provides many opportunities for older adults to become involved in their communities and in advocacy.

Max Spiro, outreach coordinator for the Colorado chapter of the Social Enterprise Alliance, then introduced the panelists, reminding everyone of the difference between “one day” versus “day one.” One day can be one day of action and it dissolves, or it just means a longing for the future; as in, one day we can have this. But instead, he said, look at this process as day one. It’s one of many. It’s now. Key takeaways from the Advocacy and Action in the Trump Era panelists included:

Vinson shared that Colorado Black Women for Political Action (CBWPA) turned 40 years old this year. CBWPA was started by Senator Gloria Tanner, the first black woman elected as a state senator in Colorado in the 1980s.

One of its main programs is teaching people how to be activists. “In order to save this democracy we have to go back to the start,” she said. “The reason we are having to talk about these same things again is because we got complacent.” CBWPA offers trainings on how to be an activist and how to govern from a place of leadership not of self and ego. It is has initiated a report card system in the past year, starting with Colorado’s congressmen and its two senators. Vinson noted that anyone in the room can be a member, and anyone can join CBWPA; in fact, the organization has the highest amount of non-black members it has had in years. “We take the rebuke of our last president very personally; it feels like a rebuke from our country,” Vinson says. “It’s nice to see so many friendly faces here tonight.”

If you want to help women of color get elected to office and want to support and participate in activist training, join CBWPA.

Colorado Consumer Health Initiative is a member-based, watchdog organization that advocates for consumers in health care. Started in 2000 by the Rose Community Foundation, it has been working in state policy ever since. “We work in some wonky stuff like insurance premium increases,” Fox said, “but right now, we are working solely on preventing the appeal of ACA. We are forming a coalition of allies and friends across the state and push back in those repeal efforts and let our delegates know we are not OK with it.” What’s at stake? 600,000 Coloradans will lose healthcare and many more will have higher premiums, he said. “The proposed timeline is to have repeal on the president’s desk is February 20, so we’re trying to do the most we can between now and then.” He said the focus is on contacting legislators right now, and offered a handy half sheet with information on legislators’ Washington, D.C., and Denver offices that offered sample email and phone scripts with talking points on ACA. “If you’re interested in becoming active in this effort, come join me,” he said. “We know this is working. If you’ve seen Denver Post article today, congressional offices have been inundated.”

Call members of your congressional delegation. Here is a handy list of numbers from CCHI, with some talking points. Download Here.

Glischinski has been a volunteer with AARP for nine years with its advocacy group. He said there are about 25 core advocacy members in the metro Denver, Colorado Springs and Fort Collins areas who go to the state capitol and testify on different bills that have to do with older adults and their families. Typically, AARP’s members are 50 and older; younger individuals can get an associate’s membership. AARP does a lot of calls to action, he said. And right is focusing on calling legislators. “Don’t just call once. Don’t worry—these people are getting paid and are volunteers that want to be there. Don’t feel sorry,” he said. “Do not let this fire that you have right now let go.” And he said if you know other people who have a fire and don’t know where to turn, encourage them to call. “We need to do this and NOT get the ACA repealed,” he said. “Medicare, Medicaid and Social Security—all three are being attacked right now.”

One Colorado’s focus is to ensure the LGBTQ community in Colorado has access to equitable and affordable health care, that LGBTQ individuals feel safe and welcome in schools, to help LGBTQ Coloradans with challenges they face, and advancing rights of LGBTQ Coloradans, whether it’s at school, work, or in housing. “We are focused on protecting our victories we have obtained in last decade or so,” Montoya said. “We know this administration is worrisome for a lot of our supporters.” For example, there was a bill at state legislature that day on religious exceptions, which Montoya said could allow people to choose what beliefs they want to follow and could allow them to discriminate. “I was just at a hearing on religious exemptions at the capitol this afternoon and luckily it was just defeated,” he said.

“There is a lot at stake right now,” Montoya added. “There always has been, but we are motivated more than ever to fight for LGBTQ Coloradans and their families and not lose our victories.” To get involved, he said, One Colorado is offering a LGBTQ Lobby Day at the Capitol on February 27, and it is also going on a statewide tour of 13 cities (first stop this week in Aurora) that continues through mid-March. “On a personal note, he said, “it’s great how many people have been interested in being active and engaged in political sphere now.” But he agreed with Vinson that the reason things are in the place they are is because of complacency. “Activism is not temporary,” he said. “The march was wonderful, and we have to stay engaged and vigilant and continue fighting.”

Bookmark One Colorado’s Take Action page and check back frequently.

With First 100 Ways, Weinstein said, folks can immediately get involved and take action on their phone. It was started by a group of entrepreneurs across the country who thought of a way to take positive action every day for the first 100 days of the new administration. The action day of the panel was to become a champion for mental health #stigmafree. The action the day prior was contacting Planned Parenthood and signing a petition. “It all takes under 100 seconds each day, which is pretty cool, she said. “This has descended on 45 cities across the U.S., people have signed up from 27 countries, the planning team is 50 people across the county – policy experts, and adverting and media execs, entrepreneurs, artists, stay at home parents, and we are growing like wildfire.” First 100 Ways is a nonpartisan “persistence” movement. She encouraged those in the crowd to join anytime.

For 52 years, Colorado Latino Leadership, Advocacy & Research Organization (CLLARO) has been active in the Colorado community representing Latinos; its history is primarily as a civil rights organization. “The last 24 months have been interesting,” Trujillo said. “The political environment has created a lot of fear in our community. Having 52 years of history, we have a leg up on how we organize and how we serve our community in these times.”

CLLARO’s focus right now is on leadership development. In the communities it serves, there is still a huge lack of Latinos in leadership positions. CLLARO helps to change this through its Capitol Fellowship program. Young adults in that program are assigned to a state legislator and become knowledgeable and comfortable with legislative process and political dynamics, “which can be overwhelming if you’ve never experienced it,” he said. Then CLLARO takes those leaders and runs them through professional development mapping and helps them develop personal action plans.

Where can you help? “We need mentors and coaches,” Trujillo said. “We need to provide these young adults with mentors in the community that can help move barriers. Navigating barriers creates a lot of issues in Latinos. I’d love to talk to you about that.” CLLARO also does other advocacy work, including health advocate training and parent advocate training.

“Thank you all for showing up,” he said. “Showing up is first step.”

Someone in the crowd asked, “Do we need to be Latin to be a mentor?” His answer: “You need to know salsa.” [laughter] “No, you don’t–you just have to be human,” Trujillo said.

The Women’s Foundation of Colorado (WFCO) is the only community foundation in the state focused on women and their families. “Since our founding 30 years ago, our focus has been on empowering women and girls and their families,” Myrland said. “The first way is research. Yes, the facts do matter!” [Applause] “The facts do matter in our work.” She said WFCO is utilizing research to guide its strategic investments in its grantmaking programs so that women have opportunities to earn a livable wage. “The work we have been doing for 30 years is still so essential today,” she said. “We are advocating for policy change, we are standing up to protect women’s rights, and we standing up when opportunities to achieve equity are being threatened.”

Whatever your strengths and interests are, there are lots of ways to get involved. We look forward to seeing you soon and hearing about your activist adventures.

Check out more resources from this event!