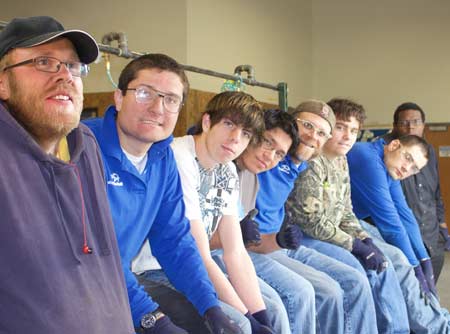 To hear him tell it, Bill Morris has made every mistake in the book on the road to creating his encore career—CEO and co-founder of Blue Star Recyclers, a nonprofit social enterprise which employs more than 35 people (25 with disabilities) to recycle electronic components in three states.

He spent about 25 years in the corporate telecom sector where he led several teams of salespeople before co-founding Blue Star Recyclers in 2009. “As for an encore career,” he says, “mine came as the direct result of essentially failing in my initial career… not because I did so great!” After finding himself obsolete in his field, Morris was forced to search for a new line of work in an unfamiliar landscape—which led him accidentally to his encore career. It was “an industry I had no experience in, and that might have been my greatest asset.” He says nonprofits–especially those seeking to create or grow an earned-income enterprise–desperately need people with business experience. The good news is those with business experience desperately want more purpose to their daily work. It’s truly a symbiotic relationship. He says for the most part, corporate America doesn’t want people in their 50s and 60s and that the feeling is often mutual. “People that age are done with that

[corporate] culture, they’ve put in their time and now they want to do something more meaningful with their lives.”

Coming out of retirement to create social good, Bill found his finest team at Blue Star Recyclers. He credits finding his encore career as a social entrepreneur with giving him the opportunity to apply those successful business principles not embraced by the corporate sector to his social enterprise. These were “things like treating people like adults, holding them accountable, not micro-managing them, building relationships…that add value to their personal lives, defining success on a daily basis and celebrating ALL wins.”

If you’re considering making the switch from the corporate world into nonprofit or social enterprise, join us for the Colorado Encore Network Meetup and learn how to successfully make the jump!