Getting old isn’t what it used to be. With 8,000 to 9,000 Americans turning 65 every day, older people are far from an anomaly. And with so many Americans in this age group, 65 isn’t even considered old anymore. Well, not as old as it used to be anyway.

Look at it this way: Bernie Sanders is 74, Donald Trump is 69, Hillary Clinton is 68, Jeb Bush and John Kasich are 63. Beyond a little gray at the temples and the ability to grab senior discounts, we all know the other thing those folks have in common, and it isn’t retirement.

Older Americans have long been a powerful part of both the electorate and the economy, and they are becoming an ever more influential part of the nonprofit world.

Now there is a new way to have fun and make a difference by asking for, tracking and donating senior discounts to nonprofits. Boomerang Giving, a recently formed nonprofit, encourages seniors to take all or part of their senior discounts and give that money to a favorite nonprofit.

Beginning in the next few weeks, Boomerang Giving will have an app available for your phone that will enable anyone to track and donate senior discounts as they receive them. It couldn’t be simpler. You can use the app to enter a discount literally while standing in line to buy a discount movie ticket, or immediately on taking your discounted or free seat on public transit, or while grabbing that always popular discounted ski lift ticket. 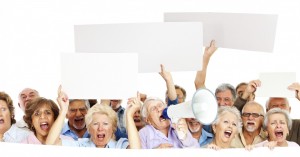 Nonprofits who want to be part of this new program can visit the website to learn all about it. They can also phone or email David Harrison at 206.940.4789 or dharrison@boomeranggiving.org.