What is Race-Based Caucusing and Can it Promote Equity?

Photo by Dylan Gillis on Unsplash

In the past, when people who identify as white wanted to learn about or contemplate issues related to racial justice, our inclination might have been to ask a person of color to explain something to us.

But these days, we’re likely to have heard that it’s unfair to put the burden of explaining racism or white privilege on those who suffer the consequences. It can be like asking someone to relive a crime against them, or it can make a person feel that they are expected to speak for an entire race. At the very least, it ends up being a lot of emotional work for them.

So instead, we might choose to educate ourselves by reading books or articles, watching documentaries or listening to podcasts. Recently I’ve also been learning about another tool, which can be used both to educate people who identify as white and to empower people of color: race-based caucusing, guided by an experienced facilitator.

What is race-based caucusing?

Race-based caucusing provides separate spaces for white people and for people of color to consider race-related issues. The Racial Equity Tools website’s page on caucus and affinity groups explains it this way:

“For white people, a caucus provides time and space to work explicitly and intentionally on understanding white culture and white privilege and to increase one’s critical analysis around these concepts. A white caucus also puts the onus on white people to teach each other about these ideas, rather than constantly relying on people of color to teach them.”

Meanwhile, the site says, for people of color, “a caucus is a place to work with their peers on their experiences of internalized racism, for healing and to work on liberation.”

Beginning in 2014, The Colorado Trust (the Trust) funded a health equity advocacy cohort consisting of 18 direct service, community organizing and policy advocacy organizations, as well as the Trust and an evaluator. The cohort decided, after much reflection, to focus on racial equity, and over the past two years, cohort members have participated in race-based caucusing. A 2019 report 1 describes the process and shares feedback from surveys on the experience.

The Westwood food-access nonprofit Re:Vision is part of the health equity advocacy cohort funded by the Trust, and Executive Director JoAnna Cintrón is among those who have participated in race-based caucusing. The caucuses meet about once a month for four-hour sessions, she said, and the person-of-color (POC) caucus is “a completely safe space.” She explained:

“Even the interpreters are people of color. It’s really a deep, deep dive into how we have internalized racism personally. And part of that is learning the history of race, but a lot is really looking at how that is embedded in yourself and how you see yourself.”

The report notes that the illumination of the depths of internalized racism led several respondents to “the realization that they needed to be ‘kinder’ or ‘more patient’ with themselves, while two others shared that it also led to a greater sense of confidence, with one noting that he felt more ‘self-assured’ and another sharing that she was ‘more proud now of my roots. And ready to claim respect for our race.’”

The idea that POC caucusing groups can promote healing also seems borne out by JoAnna’s experience. 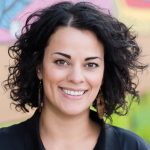 “The idea is really examining yourself and examining where that racism lives and starting to bring that out and to heal it. You need to heal yourself before you are working in community because it does affect you so profoundly,” JoAnna explained.

JoAnna said caucusing also gave her a language with which to talk about issues that white people can be reluctant to tackle. “When you talk about race, people tend to shut down—or examining privilege, a lot of times white people don’t want to examine their privilege.”

For example, she noted, white women might gloss over their white privilege because they lack the privilege of being male.

‘In a different light’

Meanwhile, white respondents to the survey also indicated being deeply affected by the caucusing experience. According to the report, one shared that it helped him to “see my past actions and attitudes in a different light, enabled me to see how some of that was the result of the advantages of privilege—where before I considered it a strength of character, luck or a product of personal achievement.”

The report continues: “Four white respondents shared that they have brought their learning into their family relationships and specifically called out that their learning has influenced how they talk to their children about race and racism.”

Another participant in the white caucus noted an “amplified awareness of systems-level factors in every situation.”

What do you think?

Has your organization participated in race-based caucusing? If so, we’d love to hear more about your experience. Comment below or send me an email.

For more details on the health equity advocacy cohort’s race-based caucusing endeavor, read the complete report. You can also find a full library of resources to support individuals and groups working to achieve racial equity at Racial Equity Tools.