Joining Vision and Action Director of Grants Erin Shaver with her children at Portage Glacier, near Whittier, Alaska, around 2011. She and her family spent time living in Anchorage and Girdwood, Alaska.

We are thrilled to announce the promotion of Erin Shaver to the role of JVA’s director of grants! Erin has been with JVA off and on for years, but in light of her new responsibilities, we think it’s time for a reintroduction.

Since 2016, Erin has been a senior grantwriter at JVA, working with many clients but spending a lot of time managing the annual contracts of TEENS, Inc., Asian Pacific Development Center (APDC) and Shiloh House, as well as grants in the past year for the City and County of Denver and New Legacy Charter School. In the past year, Erin also has contributed to several research projects, market scans and white papers on issues such as housing, gentrification, workforce development and aging. She has 18 years of experience as a writer and editor.

We asked Erin a few questions about her history with, and outside of, JVA and what’s ahead for her.

1. What does your new role as director of grants entail? 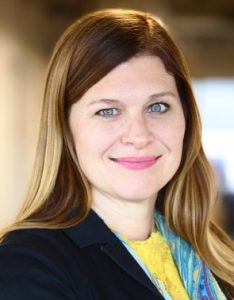 “I manage our amazing grants team, which brings in over $20M in grants for our clients every year, and I now manage the City of Denver contract. I still am working with our annual clients Teens Inc., APDC, Shiloh House and Re:Vision, who are all doing amazing work in the community.”

2. What excites you about the new position?

“I’m excited to work more with the City of Denver, which JVA has a grants contract with. I am excited to learn more about the mayoral priorities and see all the ways the City is tackling modern problems and working to achieve innovation.

“While I’m not from Colorado originally (I grew up in Florida), my kids were born in Denver, so I do feel that connection to the city.”

3. What do you think will be the biggest transition for you with regard to the new role?

“Um, filling the shoes of the two previous people who did this job, Sarah Hidey and Christy Bergman, who are two of the smartest, most amazing women, bosses and people I know! Not easy shoes to fill, but great examples to have learned from.”

4. Tell us about your first round working for JVA.

“I first worked for JVA in 2007–08. I was young and had a lot to learn, but I was eager and willing to dive into and try a lot of things. I ended up as a Renaissance woman, or jack-of-all-trades, so to speak. I wrote smaller grants and did research projects, but I also did all our website content.

“I didn’t work at JVA that long, but we accomplished a lot! I started the 411 newsletter back when Constant Contact was still a newish thing. I wrote JVA’s very first blogs and started our social media pages when using Facebook for a business/cause was kind of fledgling too.

“I dabbled in design, I took staff photos, I worked with another staffer to plan and host JVA’s 20th anniversary party, I was a backup editor, I worked on media relations and did some press releases and such for clients. It was a lot of fun because JVA was kind of a collegial environment and a great place to learn so many new skills, and the digital age was really hitting the nonprofit sector then. I got to work with neat organizations and many smart people; I learned so much.”

“In 2008, I had my son, and for a variety of life factors at the time, I made the choice to stay home with him. I ended up contracting with JVA after that for a few more years and wrote some big grants. But in 2010 I had my second child, a daughter, and my husband got a job in Alaska and we moved up there for five years.

“I kind of disappeared up north for a few years raising babies and adventuring in Alaska. It was a neat chapter in my life. I moved back to Colorado in 2015. In 2016, I started freelancing for JVA again, and then JVA had a job opening for a grantwriter. I started back at JVA the same week my daughter started kindergarten, so it was really great life timing.”

5. What did you do before you came to JVA?

“I had worked as a journalist in Boulder for about three years—right out of college. I covered higher education, politics, etc., and then I also did features, arts and entertainment, and worked as an editor, laying out and proofreading the paper.

“Then I got a temp job at the Denver Art Museum as an editor (editing the marketing materials, museum labels for the new building, things like that) when the new building opened in 2007, which was a neat experience. I worked there six months as a contract position and after that was over, I became interested in the career path of working for nonprofits too.”

6. Tell us a little more about your time in Alaska and your road back to JVA.

“At this point, I’ve now worked at JVA in three different decades at three different locations! I spent several years away from JVA, but I did stay in touch and work on some projects while I was in Alaska. 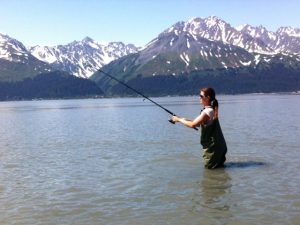 Erin lived in Alaska from 2010 to 2015, between stints at JVA. Here she is fishing in Resurrection Bay near Seward.

“I also freelanced for a lot of other organizations too: I did some freelance magazine writing, I edited websites, I wrote case studies and research papers for various nonprofits and social enterprises. I stayed in the game a bit but mostly stayed home with my children while my husband had a very busy job, and we did a lot of hiking, fishing, camping and exploring in Alaska, too. Seeing the Northern Lights, catching my first salmon, hiking up glaciers …

“I feel very lucky to have had those years coincide when my kids were little; we had a lot a lot of adventures together. I very passionately wish we had better family leave policies in this country. I still hope we can see changes in that arena soon.”

7. Your bio mentions that you spent time running a socially conscious business. Can you tell us a little about it?

“Before we moved to Alaska, when I lived in Denver, I had my own baby food business with a couple other moms for about a year. I made baby food at the Kitchen Network, a commissary kitchen on Morrison Road, which is used by many local artisans and food producers including some associated with one of our current clients, Re:Vision, which is pretty cool.

“We cooked late at night when our babies were asleep and sold it at farmer’s markets—Old South Pearl, Highland, Baker neighborhood … We gave free talks on baby food, used compostable packaging and worked with local farms east of the city to get the food sustainably. My son ate good!!”

“It was a neat project, but it wasn’t very profitable and didn’t exactly work well with the burgeoning marijuana industry that was launching at that same time at local commissary kitchens. Even though it didn’t work out, I learned a lot about all the various steps to starting a business, especially a socially conscious one. I learned it wasn’t about just good products and marketing, it was also a lot of regulatory steps and barely there profit margins and external factors. I learned so much about social enterprise in general.”

8. What’s something you have accomplished at JVA that you’re especially proud of?

“The last three years I have been doing a lot of work on our Grantwriter Only Better products for annual clients, writing grants and managing grants calendars for numerous clients, and engaging in a lot of strategy for some of these projects.

“I am especially proud of the relationships I have built with these clients, especially the ones who have returned each year to work with me. It makes me very proud to be a small part of the great work they are doing and be able to deliver a great ROI for annual clients that makes them want to keep working with us.”

9. What’s your favorite thing about working at JVA?

“We have a great team of brilliant people, and we’ve tried to cultivate a good work­-life balance here the last few years, which I am very proud of.

“We all genuinely respect and want to help each other, and anytime there is an issue, it seems someone on the team always has insight.

“And I love the clients we work with. Honestly, grants can be kind of cumbersome and labor intensive, and if you let me soapbox here, I think funders should make it easier. So to the extent I can, I want to help make it easier for nonprofits to tell their story and do their work. And when I feel like I have done that, it is a great feeling.”

Want to work with Erin and JVA’s grantwriting/fund development team? Reach out to us!