Photo by Tima Miroshnichenko via Pexels

State Demography Update Does Have Some Surprises, Though

Each year, I look forward to the Colorado State Demography Office Summit to learn about how the state’s population is changing. As a grantwriter, staying abreast of these changes is important so I can help my clients understand how changing demographics in their area may impact their work. So, on November 5, I was able to attend about half of the summit. (Let’s face it, a full day on Zoom is a pretty tall order, and I wish they had split it over two days.) But enough about the format, you’re probably reading this because you want to learn about how Colorado is changing.

In terms of overall population growth, Colorado still boasts the ability to attract new residents. In fact, last year it was the ninth-fastest-growing state in the nation. However, if you’re saying to yourself, no wonder there is so much gridlock on our freeways during rush hour, there are signs that our growth is slowing.

If you look at year-over-year growth for the last 10 years, Colorado experienced its slowest growth rate—growing about 14.8% on average each year from 2010–2020. Reasons for this slowing growth rate are that births in Colorado have decreased [1] and deaths have increased (our population is aging). If it wasn’t for net migration, Colorado’s population would be declining, since we are well below the replacement rate with our existing birth/death rates.

And what states do you think people are leaving to make Colorado home? If you guessed California and Texas, you’d be right, but a lot of folks are also moving here from Illinois.

Where growth is happening

It may come as a surprise to learn that Denver is not Colorado’s biggest county in terms of number of people. That award goes to El Paso County, with Denver coming in second. As you may expect, the other counties that round out the top six are all along the Front Range (Arapahoe, Jefferson, Adams and Douglas).

The counties that are growing the fastest, though, came as a big surprise to me. In 2020, the fastest-growing counties by percentage were 1) Broomfield, 2 Weld, 3) Douglas, 4) Mineral and 5) Larimer. You may be asking, where even is Mineral? I had to look it up, too. It’s in the southwest corner of the state, due north of Pagosa Springs. Creede, one of our state’s historic mining towns, is Mineral County’s most recognizable town.

Changing demographics impact nearly every facet of life, but one area I want to highlight is employment, since COVID-19 has heightened everyone’s awareness of economic issues. One of the consequences of Colorado’s changing demographics in terms of age diversity is that the labor market is expected to tighten, and competition for labor will continue to grow. This is because a large group of people will soon be leaving the labor force. The largest percentage change by age group from 2020 to 2030 will be people ages 75–84 (many of whom are presumed to be retired). The slide below was presented at the Colorado State Demography Office Summit and shows changes by percentage for various age groups. 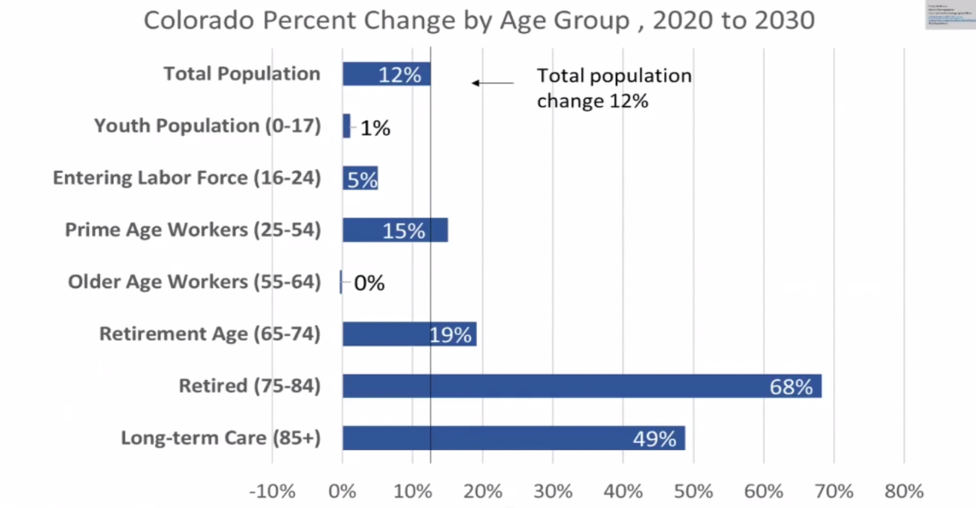 So, what will happen? The state demographers predict that fewer jobs will be created, and it is likely that Colorado will need to recruit labor from other places to fill jobs. Given the attractiveness of Colorado, I don’t think that will be very difficult. Whether or not they can find an affordable place to live once they get here is another story, though.

Another positive change that could be ushered in to fill these jobs is that we finally address the ageism that prevents employers from hiring older workers. In JVA’s view, age should be included in every business’ diversity, equity and inclusion strategy. JVA’s president is doing a lot of work to end ageism, and you can learn more about her impressive efforts at Changing the Narrative. Thank you, Janine, for your outstanding leadership on this issue.

What demographic shifts are you seeing that are affecting your work? We’d love to hear your perspective, so drop a note in the comments!

[1] You get extra credit if you knew that the most common age for Colorado women to have their first baby was 34.