All Aboard for Diversity Recruitment and Training

Photo by Jopwell on Pexels

The third and final session of JVA’s Executive Directors in a Changing World networking and conversation series met recently, focusing on nonprofit boards of directors.

The series gave nonprofit leaders the opportunity to discuss challenges and solutions in the context of the COVID-19 pandemic and a society awakening to heightened calls for racial justice. Senior Trainer and Facilitator Sandra Harris Howard led the most recent session.

JVA has been sharing some highlights of these discussions in the hope that other changemakers may feel supported by reading about the experiences of others in the nonprofit world. 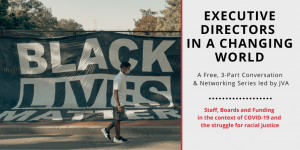 training on their general duties, much of the meet-up was spent discussing nonprofit leaders’ desire for board training on diversity, equity and inclusion (DEI), as well as executive directors’ challenges and successes related to board recruitment for diversity.

Some board-related topics also came up briefly during the first two sessions of the JVA series (on staff and fundraising), and relevant discussion from these meetings is included here as well.

Several nonprofit leaders had noted in past sessions that their organizations’ boards had many members who had never before served on a board of directors. Said one: “We want to acknowledge they are volunteers and they are there because they care about the organization. … They are trying to do what is best.” Another added: “I don’t think I have ever had an experienced board member on my board.”

Participants at the most recent meeting also noted that it can be difficult for board members to adapt from a primarily “working” role to more of a “governing” role and for executive directors to communicate their needs in this regard. They cited as challenges:

Sandra noted that during recent JVA facilitations, some teams have come to the conclusion that they need to formalize board member orientation to ensure that members truly understand their roles and responsibilities. This can be done remotely, perhaps even 15 minutes at a time during board meetings, and can thus include longer-serving members, she explained.

At least one participant planned to give this a try: “to go over stuff in the handbook … for people who are feeling uncomfortable asking questions and to remind long-term board members of their duties.”

Session participants reported varying levels of interest in and acceptance of DEI training and recruitment by their organizations’ boards. At a previous session, one nonprofit leader described trying to convince the board that it would be appropriate to bring a highly involved program participant, with both lived experience and formal education, onto the board. “My board responded in a very classist way. … They were like, how could they be board members? And they would never be able to be your boss.”

Another executive director with a board more interested in DEI noted the potential that a holdout could be persuaded:

“DEI is really important to me, and several board members really want us to make movement on that, and then I have I think one who is not there at all. … I do feel there is an element of education we could do there.”

Finally, in one participant’s experience, DEI training initially led to board resistance and then turnover, but today the board’s members are more engaged and the DEI committee has grown from two to seven. The participant explains:

“(W)hen I first got here, they had already planned to embark on a yearlong DEI (training) with a consultant. We started it, and I realized there were a couple of people on the board who were never going to get on it. … At every meeting we were talking about DEI. They got tired of that and left. … We are still on that journey, but everyone now is already in a space of either having some knowledge or being in a learning space.”

Board recruiting with diversity in mind

Session participants noted that while board recruitment can be difficult in general, both the pandemic and the desire to increase board diversity have added extra layers to the endeavor. They explained:

Sandra offered the following advice on convincing a nonprofit board of the importance of board diversity:

One participant confirmed: “One thing I have found is I might get more traction with the member who is not as DEI aware when I speak in terms of ‘funders want to see this’; ‘funders are asking what your board looks like.’ That is starting to make some headway.”

What works in recruiting for diversity

The discussion on recruiting for diverse board members covered topics including whether to adjust a give/get policy, finding allies and avoiding tokenization.

One nonprofit leader with experience in recruiting more diverse members to their organization’s board described the experience at length, recounting:

“Sometimes it can happen organically. I was at a Christmas party and met a friend of a friend, who works for a foundation. I started talking to her about our organization. She was familiar with it. … I asked her to get coffee to talk about the possibility of joining our board.”

“When I am recruiting, I openly talk about DEI as a challenge for us. But I also need to make sure they know they will not be tokenized—but they also need to know our board isn’t very diverse right now, and it’s a work in progress. … So, I am not sugarcoating any of it.”

“Another was a little more formal. … It took a couple of years to create the relationship, and for her to have availability. Sometimes it takes a little while. … going out to lunch, grabbing coffee, saying this is where our board is at now… This person has a lot of experience working on DEI at larger organizations. She really became my ally in this work we are doing as a board. None of the problems were shocking to her.”

Acknowledging that requiring a particular donation from each board member (or having a give/get policy) can make some potential members more hesitant to join a nonprofit board, participants reported varying experiences:

Other advice from an experienced executive director:

“You can’t do this alone as the ED; you have to have other people on the board who are interested in this … And it’s better if you can have multiple people come on the board at the same time; you can’t have them be the only one. It makes people feel tokenized, even if that’s not the intention.”

Sandra offered the following advice on convincing a nonprofit board of the importance of board diversity:

JVA was grateful for the opportunity to engage in conversation with nonprofit leadership through this series, and we look forward to potentially leading similar networking events in the future.

Interested in formalized board development led by JVA? We’d love to help!

Missed the Executive Directors in a Changing World blogs focused on staff and fundraising? Check them out!