Congratulations to Lisa Cirincione on 20 Years with JVA

If you’ve spent much time on our website, you probably know that JVA has been around for over 30 years. But did you know that Senior Resource Development Associate Lisa Cirincione has been with JVA for almost two-thirds of that time?

That’s right, we recently celebrated Lisa’s 20th anniversary with JVA. (As much as we wish we could have gathered in person to buy her a few Pliny the Elders to mark the occasion, a chorus of tributes via Zoom had to suffice.)

Lisa’s expertise and institutional knowledge are such that, as shared by Director of Grants Erin Shaver, we have had clients insist on working with Lisa. Her reputation—backed by her millions of dollars in grant wins—precedes her. She also has a way with clients that kindly and clearly communicates what’s possible.

Lisa leads JVA’s well-attended Write a Grant in a Day training and made the shift this year to instructing the class online. Its popularity continues—her most recent class, in November, had a full-capacity 12 enrollees! She’s also a go-to blog writer when it comes to spelling out the details and ramifications of government policy, trends in nonprofit giving and other topics that require something of a deep dive.

In honor of her 20th anniversary, I asked Lisa to share a bit about her experience at JVA, as well as her life outside the office.

You have a law degree; did you practice law before coming to JVA? What made you come to JVA initially?

“I went to law school intent on practicing healthcare law. While I was in school, I clerked at a boutique law firm that specialized in that and realized that while I was very interested in the topic, the day in/day out of practicing was not for me. So, I had to rethink what I was going to do with my career.

“After graduating and passing the bar, I went to work at a nonprofit that focused on determining if there was consensus among Coloradans about what kind of healthcare is appropriate at the end of life. That’s where I learned about grantwriting—hello, Robert Wood Johnson Foundation! We tried to hire Janine, but she read our grant, thought it was terrific and wouldn’t let us hire her. Long story short, when the nonprofit completed its mission, I went to work for Janine (JVA’s founder).”

Does your legal background inform your work as a grantwriter?

“Absolutely! Law school taught me how to think critically, put a strategic argument together and write competitively. It also helped me learn how to compress a lot of work into a short time frame, which is what you have to do when your career revolves around writing federal grants.”

How has JVA changed since you first got here? 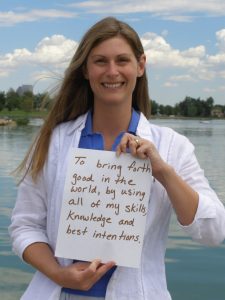 “When I started at JVA, there were only a handful of staff and they were all grantwriters. Now, we have experts in evaluation and capacity building, as well as grantwriters.”

How has it not changed?

“JVA has transformed itself from a consulting firm focused only on grantwriting to one that looks to comprehensively build the capacity of nonprofits that are working to change their corner of the world. I’m proud to continue to work for JVA.

“JVA has also been slowly circling Sloan’s Lake since I started. We began in a tiny house in Highlands on the uber-trendy 32nd and Lowell block. Then we moved a little bit further west on 32nd to a small building that is now a spa. Our next move was to the west end of the lake where we had a huge building out of which we could hold trainings. Now, we are on the south side of the lake in a coworking space with lots of inspiring entrepreneurs.”

What has kept you here?

“The variety! People sometimes think that I must get bored doing the same job for 20 years, but that couldn’t be further from the truth. In a typical year, I write for between 10–15 clients, and every client’s project teaches me something new—insight into the community’s needs, research about what works in that field, not to mention just learning to work within different organizations. This work has taught me how to be extremely adaptable because every client’s needs, expectations and timelines are different.

“It’s also taught me how to absorb and digest tons of information quickly so I can write about it as if I’ve been a practitioner in that field for as long as my client has. Also, the window of time to write federal grants is so fast and furious that I don’t have a chance to get bored.”

What’s something you have accomplished at JVA that you’re especially proud of?

“I’m incredibly proud of how much money I’ve helped bring into Colorado to help solve our state’s biggest problems. To date, I’m up to $170 million. I’m aiming at $200 million because I like round numbers, but who knows if my goal will shift after that!”

Your bio mentions that you have “earned the title of Ironman.” That’s really impressive! Can you tell us a little about that experience? 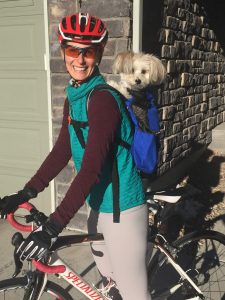 “Well, that was a huge accomplishment for me, but I think that’s a ‘one and done.’ An ironman distance triathlon is a 140.6-mile race—a 2.4-mile swim, then a 112-mile bike ride, followed immediately by running a marathon. I just don’t have the drive anymore to train that hard and for so long. You have to be willing to dedicate many hours every day to swimming, biking or running (sometimes all three in the same day).

“The race itself was a long day, but I chose to race in beautiful Sonoma County, so the scenery helped take my mind off how much my body was telling me to stop. Even though Sonoma is known for its wine, my first stop after crossing the finish line was to the Russian River Brewery so I could drink a pint of Pliny the Elder. That is my favorite beer, and I don’t think it ever tasted as good as it did that day.”

Want to work with Lisa and JVA’s grantwriting/fund development team? Reach out to us!