Photo: Crystal Middlestadt, third from left, with Chinook Fund staff and board members

Welcome to our Changemaker Profiles blog series! Each edition we profile one outstanding social changemaker from the JVA client community. By sharing the stories of some of the incredible people we get to work with every day, each accomplishing extraordinary work in nonprofits, government, social enterprise and elsewhere, we hope we will bring a little light and inspiration to your day!

For this edition, we spoke with Crystal Middlestadt, executive director of Chinook Fund. Founded in 1987, Chinook Fund is a foundation supporting grassroots organizations working on issues of social and economic justice. It pools resources to seed groups making a positive, systemic impact to improve the quality of life for all Coloradans. Community input is integral to Chinook Fund’s funding decisions.

1. Tell us about your organization and the social change you are trying to achieve.

“Chinook Fund is a community foundation that primarily funds emerging organizations working on issues of social justice across Colorado. We are part of a national network of foundations launched in the late 1970s and ’80s, primarily by white inheritors of wealth who wanted to support social change and fight the rollbacks to civil rights, particularly under the Reagan administration. In Colorado, this included the fight against the anti-LGBTQ Amendment 2.

“These progressive philanthropists wanted Chinook Fund to be accountable to the communities it served and set up community-led grantmaking as a model. Chinook Fund and many of the funds were members of the former Funding Exchange Network.

“In 2016, we expanded our grantmaking to the Giving Project model, which is made up of community members—across class, race and profession, with some members who are newer to social justice and others who are seasoned activists.”

“Originally developed by Social Justice Fund NW, Giving Projects are a unique, participatory model of funding. Over the course of six months, a diverse group of 20–25 volunteers engage in political education, community building and skills building around fundraising and grantmaking. Political education centers on race, class and power analysis as volunteers examine their own personal relationships with privilege and oppression through storytelling and hands-on activities.”

“With a focus on one-to-one fundraising asks, Giving Project members learn how to have values-based conversations with their friends and families to ask them to contribute to the grant fund. Members also seed the grant fund with their own meaningful gift. These donations and meaningful gifts are how we secure the funds to award to grantees.

“Since launching this model, Chinook Fund has reached nearly 1,000 donors and distributed more than $320,000 to social justice groups.”

2. What keeps you inspired and going when things get tough?

“The work our grantees are doing every day, on the ground. An example that’s been inspiring to see is the work on 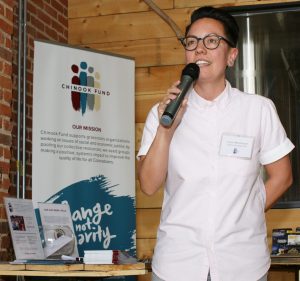 Denver’s Ordinance 300, the ‘Right to Survive,’ which has been developed with Denver Homeless Out Loud—one of our grantees. They’re trying to repeal the camping bans in Denver so people are able to have adequate shelter.

“With the Giving Project, I’m inspired by the dynamic ways people show up in their leadership, how they’re sharing power in a diverse group, and how they take action to organize their networks and raise money for our grantees. Because we practice consensus-based decision-making, GP members really need to participate (in decision- making) with a clear understanding of their relationship to power, wealth, race, etc.

“During those discussions, each person is challenged to be aware of how their own identities and experiences may be impacting the ways they participate, whether that’s how much they speak up versus listening to others, the urge to avoid conflict with other members or other dynamics. Witnessing people practicing democratic values and sharing power definitely inspires me.”

3. What advice would you give to someone who is trying to break new ground in a traditional field?

“It’s important to be strategic about where and how you bring your leadership, including nurturing relationships outside of more formal convenings. Any change we’re advocating for, especially in philanthropy with its long and complicated history, is only possible if we change hearts and minds. This requires a deep investment in each other, in building authentic and accountable relationships.

“Over the past couple of years, I have been learning to embrace sharing my own story as a practice in leadership. I come from a working-class family in Oregon, and to be in this field with so much wealth, privilege and concentration of power can feel uncomfortable and disempowering. As someone new to institutional philanthropy, there have been times when I am not familiar with the financial language being used when talking about issues such as endowments or impact investing. In those moments, I have had to trust that my questions are legitimate, even if I don’t have the vocabulary down yet.”

“These financial systems are set up to keep people out. A lot of times when I’m not getting the right answer, I’m learning that it’s not necessarily because I don’t know the right jargon, it’s because there’s a lack of values alignment or that people haven’t been questioning how the systems are working—the status quo.”

“This is where Chinook Fund really shines in bringing a unique perspective to this field. We create spaces to talk openly about our relationship to money and class, topics that are taboo in a lot of places. Through the Giving Project, we explore dynamics in our families, the shame we may feel about having too much or not enough, and invite members to question these messages we’ve internalized. We’ve found that these transformative conversations lay the groundwork for bolder collective fundraising efforts.”

4. What book do you recommend to everyone you meet and why? OR What book is on your to-read list and why?

“Right now, it is Decolonizing Wealth: Indigenous Wisdom to Heal Divides and Restore Balance, by Edgar Villanueva. I had a chance to meet him while I was working at my previous job, at the Grassroots Institute for Fundraising Training. I was fortunate to hear him speak in Denver in March at Colorado Impact Days and an event sponsored by Colorado Funders for Inclusiveness and Equity. Edgar tells his personal story as a Native American person from a working-class background who found his way to philanthropy. And he is candid about his experiences of being tokenized at times. He shares his story in a really accessible way that I really appreciate.”

“He exposes the contradictions in philanthropy and challenges foundation trustees and staff to examine the field’s relationship to wealth, wealth built through legacies of slavery, the genocide of indigenous people in this country, and the exploitation of natural resources. Edgar is calling for our sector to take action to move endowed assets to be in full alignment with our values and mission.

“Federal law requires private foundations to give away 5 percent of their assets annually, while the other 95 percent is typically invested in Wall Street, often working directly against their mission. For example, a foundation that supports racial justice may hold investments in private prisons or big banks that profit from detaining immigrants. Edgar calls on philanthropic leaders to consider which industries they’re benefiting or which communities they’re harming when their investments are not mission aligned.”

5. How have you worked with JVA, and how has that helped your organization?

“We had a wonderful experience last year doing strategic planning with our board and staff. It helped us tremendously, both in identifying our core values and areas where we were passionate about change, but also to develop a clear plan for implementation and action that translates to our day-to-day work. We have been able to accomplish much more than I anticipated, because of JVA’s consultation.”

6. What else would you want to share with us that we haven’t asked?

“We are always recruiting for the Giving Project, seeking new volunteers to join the Chinook Fund community. Visit www.chinookfund.org to learn more and to RSVP for an upcoming informational session.”

Keep up with the area’s most inspiring changemakers—read JVA’s Changemakers blog!